Dust that normally accumulates on the solar PV module partially shades the module reducing the amount of sunshine it receives and as a result the amount of current generated and stored. During the rainy season rainwater washes most of this dust off the module. However, over long dry spells it is necessary to regularly clean the module with water to improve their performance. We actually recommend panel cleaning for every after two to three months especially in dust-prone areas.

Care should be taken when ascending onto the roof. For our customers, this is included on our operational manual and end-user training that we conduct during and immediately after installation.

It is also important to monitor the trees growing near the solar module to ensure that growing branches do not shade the module. No part of the module should be shade at any time of the day between sunrise and sunset.

The amount of energy available from a solar PV system is limited, it is therefore necessary to use this energy as efficient as possible: Our technicians ably train the customers after installation so that they can properly maintain their solar systems.

Switch off lights and appliances when not in use

During cloudy days it is often necessary to reduce the normal daily usage of lights and appliances so as to have sufficient energy for the most basic power needs.

Over the lifetime of the system lights and fuses will have to be replaced. The type and rating of fuse or light will vary from system to system. We advise our end-user to contact ouroffices for instructions on how and when to replace them and where the spares can be sourced System monitoring and Performance

The type of display varies from controller but the most common light indicators are green for a fully charged battery, yellow for a low charge level, and red for a “malfunction”/discharged battery
The user should ensure that they are trained on the meaning of the various displays of the installed charge controller.

Of all the components of a solar PV system, the battery is the one that requires the most maintenance. The most commonly used batteries in PV systems are sealed lead acid batteries which the electrolyte is often in non-liquid form. These batteries do not require topping up with distilled water. Sealed batteries are not maintenance intensive and are often referred to as “maintenance free” batteries.

Batteries have a limited lifespan. As a battery ages its capacity reduces and it is unable to hold charge, as a result it cannot power appliances for the same duration as it did at the inception. A good indication that one battery has outlived its useful life is that the charge controller disconnects the load earlier than usual and more often. To confirm that your battery has expired take it to the nearest battery station for testing.

Different types of batteries have different life spans. The sealed batteries have a life span ranging from 2 – 8years depending on the manufacturer or brand. Battery life is dependent on how they are discharged and maintained. The life of a battery will be significantly reduced if it is completely discharged frequently and if it stays for long periods without being charged. For solar PV systems to operate well batteries should be replaced when they are worn out and can no longer hold charge.

Batteries materials such as lead(Pb) and sulphiric acid are harmful to the environment. If batteries are thrown away, these poisonous materials can leak into the soil and water sources. Fortunately most of the battery materials can be recycled and used in manufacturing new batteries.

The following are useful safety tips that should be followed when handling batteries:

When batteries are being charged they release an explosive gas mixture. This gas can easily be ignited by an open flame or spark from a match, candle, cigarette or electric spark. Because of this, batteries should be placed in a well-ventilated room to prevent accumulation of such gases. Ventilation should be as close to the ceiling as possible.
In addition to proper ventilation, open flames, cigarettes or sparks that can ignite the gas should never be in the vicinity of the battery. Batteries should be kept in an enclosed place to prevent children or unauthorized persons tampering with them. 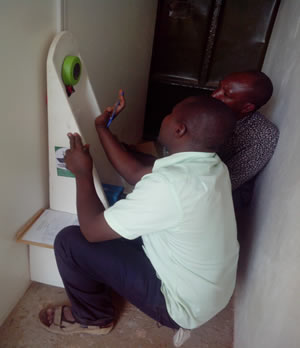